Aiming Not to Please

One of the Party's most revered slogans is "Serve the People" (为人民服务). It appears that Liuzhou's city planners (if that's the appropriate term) believe it's time the old saw was replaced. Judging from their actions, they seem to think that a better one would be "Blockade the People" (为人民挡路).
A short time ago the city initiated a new bus "service". (Again, my choice of words is open to criticism.) Among other problems, the new bus stops are enclosed, with entrance and egress at only one end, through a single passageway that is only wide enough for one and a half Chinese people (or one FFG if he doesn't take a deep breath).
Those entering the enclosure must stop in the entryway to pay the bus fare, which invariably involves fumbling around in purses or pockets. Those trying to leave the enclosure are expected to squeeze by. You don't have to wait for rush hour to see massive passenger crunches.
I believe these things were designed by committees. There was undoubtedly a Committee in Charge of Paperclip Purchases; and a Stapler Committee; and of course the Committee for Banquet Scheduling (and its Alcoholic Beverage Acquisition Sub-Committee); etc. etc.
It's obvious that the various committees didn't communicate with one another. Take a look at these photos.
The left-hand photo was taken just outside the entrance/exit

gateway at one bus stop. The committee in charge of this area

painted across the motorbike lane on the way to the sidewalk.

They  were not concerned with the planter box between the

motorbike lane and the sidewalk -- that must have been the

responsibility of another committee. Passengers coming and

impromptu path through the planter.
The committee in charge of the planter box crossing, likely

worn out by a hard week of banqueting, decided they didn't have to do anything. They could simply take advantage of a preexisting paved area through the planter box, shown in the right-hand photo. It's about 30 meters down the road from the entrance/exit to the bus stop enclosure, so when you walk through it and cross the motorbike lane, you run smack in to the enclosure. The committee presumably didn't see that as important, if they saw it at all. They must have figured the passengers could make do by using the aforementioned path through the bushes. Or they could walk in the motorcycle lane for the 30 meters to the entry/exit gate, which would have the potential advantage of bringing more business to area hospitals.
I took these photos at one bus stop, but it certainly isn't the only one with problems. The other stops are just as passenger-unfriendly, if not more so. For example, a three-foot high fence has been installed down the middle of the sidewalk at downtown bus stops, parallel to the bus stop enclosures but thirty or forty meters longer than they are. Elderly people must walk around them to get in or out of the enclosures (young people can and do simply climb over). Inconveniencing the elderly is the only apparent purpose of this fencing.
Well, this being China, creating inconveniences probably isn't the real purpose. Most likely somebody's brother-in-law owns the fencing factory and was able to offer an attractive kickback to the members of Bus Stop Periphery Decorations Subcommittee. The inconvenience to the public was just a side benefit.
Nor did the problems start with the recent construction of these bus stops. There are

numerous other places around town where pedestrian convenience has obviously taken

a back seat to other considerations. The intersection pictured below, in downtown

Liuzhou, has been this way since before I came to town. The Crosswalk Committee,

to lunch when this area was planned, if "planned" is the right word. I wonder if they were

all at the same banquet.
Other Chinese cities have similar problems, but not to the same extent as in Liuzhou.

The leadership here seems to have a special talent for mind-boggling decisions.
I've asked several people how such screwed-up planning can occur in a country that has so many intelligent and capable people. The standard answer is, "Well, there's nothing we can do about it, China just has too many people." If you can see the logic in that, you're a much smarter person than I am.
There are other possible explanations, of course, but I'll save them for future discussion

UPDATE: In early May 2014, paved pathways were cut through the planter boxes at sidewalk level at at least three of the bus stops.
UPDATE 2: Regarding the anti-elderly fencing at the bus stops downtown, two sections of the fence on the west side of the street were removed in late May 2014, allowing easier access to the bus stop enclosure. As of early July, the fence on the east side of the street was still intact. This leads me to speculate. (Who, me?) Maybe #1, the merchants on the west side removed the fencing surreptitiously because it was interfering with customer access to their stores, and the city hasn't gotten around to replacing it; or maybe #2, the merchants on the east side haven't yet paid their, ahem, "license fees" to the people in charge of the fencing. 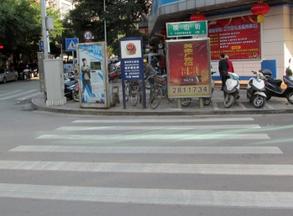