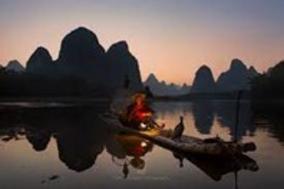 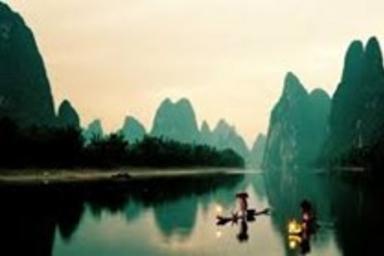 There’s a place where the sky is always pure blue and the warm sun always smiles down from above.
There’s a river with water forever so blue, so pure, as translucent

as the morning air. Mountains along the riverbank stand tall and erect

as poplar trees on a roadside, not high but splendid. There are no tall

forests on them, but they’re always lush with greenery. The mountains

actually aren’t one continuous stretch; rather, they stand there one by

one, each independent and precipitous, overlooking the river with

gloomy shadows. They seem to have forged an intimate bond or

indissoluble partnership with the river.
If you’re fortunate enough to be sitting on a beach by the river,

staring  off into the distance, shaking his head unceasingly. He could no longer speak.

His eight cormorants stood beside him, also shaking their heads. His crazy head

shaking never got better after that. Twenty years later, people could still see him fishing

on the river with his eight cormorants, all of them shaking their heads crazily.
Back then Yangshuo had one more famous viewpoint than it has now: some truly

beautiful swaying shadows would appear on the river’s surface in the twilight. People at the time called it Baisha Shaking Its Head, and no scenic spot was more famous. Too bad it’s gone now.
People never saw Third Sister Liu again after that. At first they could hear weeping on the river’s surface that was sad enough to bring them to their knees. The sound gradually became quieter until, a long time later, it could barely be heard. It no longer resembled weeping – it was more like a gossamer thread of song that’s lasted for three hundred years! All this time curiosity seekers have tried to find the lost Angel of Song. They climb to the mountaintops on both sides of the river, but they only see the mountains crowded together like trees in a forest, and the Lijiang wending its way like a long white tassel from endless clouds down into more endless clouds, the blue sky above like the sea, and the white clouds all around like walls.
*[For a more traditional version of Third Sister Liu’s legend, click here – Fannyi] 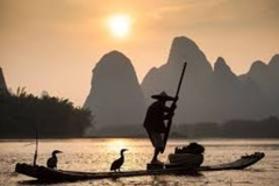