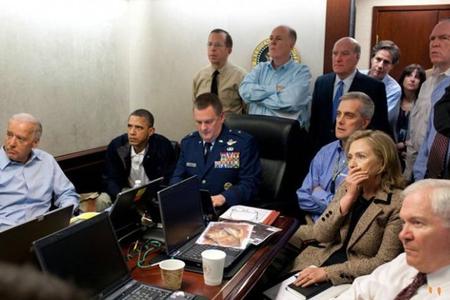 America is a "Backward" Country
by Huang Lihong

[Note: Most of this article was previously translated by Tea Leaf Nation and David Wertime, and published on the Atlantic' Monthly's website. We're publishing our more complete if less eloquent translation to fill in the gaps. Besides, we think the article is worthy of inclusion on more than one website. – Fannyi]

America: Obama and his staff with eyes glued to a screen in the

of the hunting down and killing of bin Laden. My feelings are:

to sit. Poor Obama doesn't even have the prestige of a village

another room. It's small and lacks luxurious decorations, not at

all appropriate for a great power. I'm afraid the office of any

county administrator in Imperial China would be much bigger and much more luxurious.
Third, there are no fruit plates of beverages in the meeting room, no expensive smokes fit for an emperor – poverty-stricken, miserly, and they say this is the world's number one economy! Bah! I have ample reason to disrespect America.
(19) The new U.S. Ambassador to China, Gary Locke, and his family took an ordinary civil passenger flight from Seattle, arriving in Beijing at about 10 p.m. on August 12, 2011, after a 12+ hour flight. Mr. Locke carried a pack on his own shoulders and a briefcase in his hand. He declined the use of a special car, instead taking an ordinary commercial vehicle to the ambassador's residence. He is like a model Communist, living a plain, hardworking life and saving the taxpayers money.
While Beijing officials are lining up to send their sons and daughters to attend famous universities in America or England, Ambassador Locke sent his daughter to a school for migrant workers in Beijing. Most of the students at that school are registered residents of Henan Province, their parents having come to Beijing from there to look for work. The clothes Ambassador Locke's daughter wore were no different from what the other students wore. Ambassador Locke said, "I'm a migrant worker, too."