T-shaped. The bottom of the T was excavated in the late 1950s or

of nuclearwar with the USSR (and maybe some other country as

bureaucrats in the City Planning Commission. Using that term

probably helped justify the construction costs (or maybe they

thought the merchants needed to be civilly defended against

some unspecified danger).
The stem of the T runs about 1/3 of a mile directly beneath

crossbar is maybe 1/4 of a mile long with lots of side branches – I’ve been lost in the maze more than once. My wife Laopo is a bit afraid of the place. When she's down there she can't stop thinking of the heavy trucks and buses driving along right above her head. (The idea that she may be safe from nuclear attack doesn’t seem to comfort her.)
The shops are rather small, maybe a few hundred square feet on average, except for a large Wal-Mart-type store at the north end (which is closed now). Most of the shops sell over-priced clothing and accessories. (Given the number of clothing stores in this town, you’d think the locals must be the best-dressed people in China.) The overhead TVs show closed-circuit advertising on the assumption that someone, someday, might pay attention.
I took the above picture on a Tuesday in midmorning when the mall was nearly empty (by Chinese standards). I won’t voluntarily go near the place on a weekend afternoon.
The original air raid shelter is close to the river. It’s about two stories deep and floods occasionally from heavy rains, but only an inch or two. The new section is three stories deep. The part closest to the river flooded soon after it was finished to a depth of about one foot, I was told, and will probably flood again every few years. The shop owners seemed to take it in stride. They just pumped the water out and (presumably) called their insurance agents.

9/30/2012 Liuzhou Laowai wrote:
This is Liuzhou's only underground shopping mall. It isn't T-shaped. Check the maps at most exits. It is 工 shaped. It opened in November 2008 and the final extension opened in April 2010. In July 2009 it flooded.

The flooding was a lot more than a foot deep. I have the photos. Only idiots would open an underground shopping mall yards from a notorious flood zone.

Although I've heard the story before, I find it very hard to believe that the original stretch was constructed as an air raid shelter. It was only big enough to hold about twenty people and why would they build a shelter in the dead centre of the city - a long way from what was then the government HQ? It would be like saying "aim here". Anyway, it wouldn't be of any defence against a nuclear attack.

BTW, Mao was a lot more afraid of the US than Russia.

The "Walmart" type store, Nancheng supermarket closed on May 31st 2012. It remains an empty space.

Anyway, the mall is full of the most tacky, cheap rip-off shops in China. The average age of the clientèle is about 12. The staff maybe 13. And almost everything they sell is fake.

But it is warm and dry in winter. And there are no e-bikes.

10/1/2012 Fannyi wrote:
In addition to the downtown mall, there are at least two other underground shopping centers in Liuzhou. They’re both near the Flying Goose market and both are quite a bit smaller than the downtown mall. The larger of the two is under the park in front of the Shang Dao Coffee Shop. The other one, which is roughly comparable to the original section of the downtown mall, is in the northernmost of the two pedestrian tunnels that go under Fei’E Road.
Also, natural caves in two mountains across the river from downtown have been greatly expanded and are filled with shops. Whether you’d call them “underground” or “under-mountain” shopping malls is a matter of definition, I guess.
Regarding the shape of the downtown mall, the east-west section at the north end is about ¼ mile long, while the east-west section at the south end (the original section) is, what, maybe 30 meters? To me it looks like a T in Times New Roman font (a long crossbar at the top and a short one at the bottom). While reasonable people could differ, I think a Times New Roman T is a closer description than 工.
The original section is indeed small for (and probably useless as) an air raid shelter. However, the signs above both entrances say “Underground Street for People’s Defense” (人防地下街). (The gold-colored characters at the very top, not the red characters halfway down.) It was likely called that more for propaganda purposes than anything else. The leaders in Beijing at the time would certainly have been unhappy if the locals had said they were building a Shopping Street.
Incidentally, I believe the two mountains mentioned above were also tunneled out as air raid shelters – at least in name. There’s a small door on the park side of one (Ban Shan) labeled something like Civil Defense Shelter Office (I don’t remember the exact wording).
I wasn’t sure of the exact opening date of the initial section. That’s why I left it fuzzy and said the “part closest to the river flooded soon after it was finished”. As for the final section, at the start of the project the government web site gave an estimated completion date of July 2009. I was away from Liuzhou from August 2009 until March 2011. I knew the July part of the estimate was wrong but foolishly decided to accept the 2009 part. I should have been more careful and am duly chastened.
As shown in your pictures, the area right along the river was flooded to a depth of several feet. I also remember that the food court just down the hill from the mall entrance was under three feet or so of water. However, the question is how deep the mall was flooded. As I said in the blog, I was told (by a clerk in one of the shops) that the water got about a foot deep, and I really have no reason to doubt that. All I can say from personal knowledge is: I went into the old section when it first re-opened, right after the water started to recede, and I could see down into the new section which was still blocked off and being pumped out. The water was several inches deep at that time. I couldn’t see any water marks or other evidence to show what the maximum flood depth had been.
And yes, the Nan Cheng is closed and the area is empty for the time being. I should have noted that in the blog.
Thanks for your comments, Liuzhou Laowai, I appreciate your expertise about all things pertaining to this town. I’ll make changes to the blog entry to reflect the foregoing. 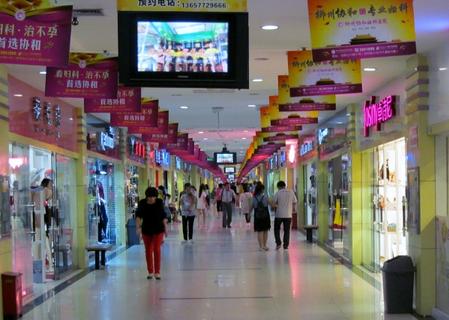