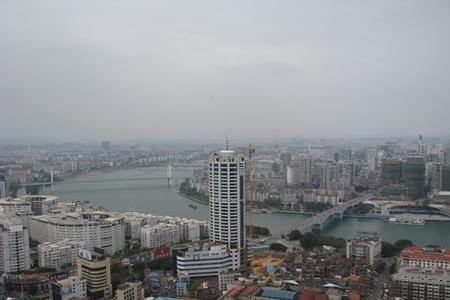 The Bridges of Liuzhou City

New translations have been added to the website chinese-stories-english.com: four mini-stories, one short story and two newspaper articles. This blog entry describes some more of Liuzhou's scenery.
Liuzhou's nickname is Dragon City, but it could just as well be Bridge City. As of 2011 there were nine bridges across the river in the downtown area, with three more under construction; not to mention three more bridges in the suburbs plus a tunnel and more bridges in the planning stages. The earliest bridge, now

long gone, was called simply the Floating Bridge. It wasn’t a real

bridge, actually, just a bunch of boats tied together with planks

laid on top. Here’s a picture of a picture that's on display in the

local museum. Saddle Mountain is in the background.
A Chinese-American friend remembers crossing the Floating

Bridge in 1948 when he was 13 years old, fleeing the Communists

during the Civil War. He didn't get away then, but later he came to

the US as a "Visiting Scholar" at the U. of Nebraska. He decided to

to bring his wife over. They're retired now and own several acres

of land in Florida on which they grow tropical fruit as a hobby. Interesting life.
You can see some of Liuzhou's bridges in the following two photos, taken from Saddle Mountain looking north toward downtown.
The South River Bridge on the right side of the top picture leads

intended). On the left of that picture is the Red Light Bridge, so

called because it goes from downtown to the Red Light District.

No, the name doesn't mean the same thing in Chinese as it does

in English. I think the "Red" refers to Communism, but Laopo

thinks it refers to rainbows that the people living downtown would

often see over the area.
Anyway, next up is the Iron Bridge, which was built by the

Russians in the early 1950s, the first real bridge across the river.

the tracks and is fun to walk across, especially when a train comes

along.
In the bottom photo the South River Bridge to downtown is on

the left, then the Literary Munificence Bridge and, around the

bend, the Flourishing Literature Bridge. These latter two are

named after the streets they connect to, which in turn are named

for cities in south China; the Chinese are very poetic. The

as a working title during construction but the name was changed

when the bridge was christened. I call it the Singing Bridge: The

prevailing wind blows through the guardrails at just the right angle

to hum, softly most of the time, but louder and louder as the wind picks up. It's a little spooky at first, until you figure out what's making the sound.
One of the new bridges under construction is just out of the picture to the north. Its working title is the Double Hugs Bridge, a winner as far as I’m concerned. Unfortunately the government apparently intends to christen it as either the Partridge Bridge or the East Ring Bridge. Maybe the Chinese aren’t so poetic after all.

UPDATE: I've learned that the Iron Bridge was actually built by the Chinese Nationalist government in 1938, but destroyed by them in 1944 to delay the advancing Japanese army. The Communist government tried to rebuild it in the early 1950s, but failed and had to ask the Russians for help. 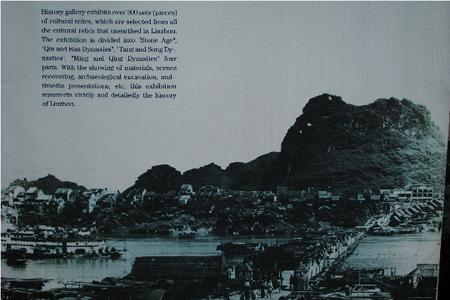 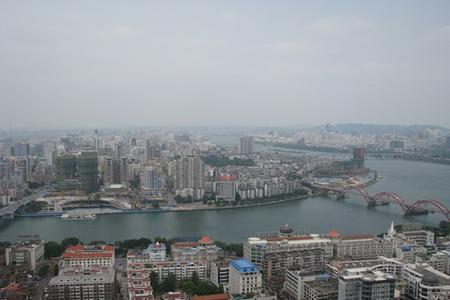