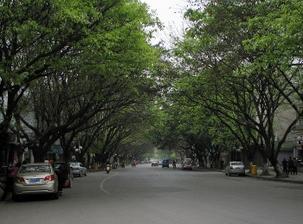 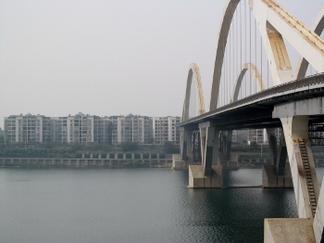 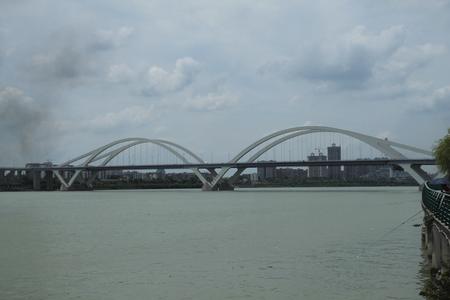 This is the Broad and Elegant Bridge (广雅桥 Guangya Qiao), or part of it, anyway. It

was supposed to be completed in April 2012 but, as you can see from these photos

taken last month, it still has a way to go. And no, that’s not an optical illusion – the

bridge is headed directly for that row of condos. One of the buildings has already

been torn down and it appears that one or two more will have to go as well.
The condos were built by the Liuzhou Railroad Bureau for employee housing.

Construction was finished in 2007 or 2008, as I recall. By the time they were finished,

they were already doomed: the Railroad Bureau had decided to move a good part

of its operations to another city, rendering many of the condos superfluous, and the

Liuzhou government had proposed building the bridge. I don’t know the sequence of

these decisions, but in any event it seems that communications among the various

planning departments were not exactly stellar.
And here’s Broad and Elegant Road,

from which the bridge takes its name. It's on

the downtown side of the river across from

the condos and will eventually serve as an

access road for the bridge. It is indeed both

broad and elegant; the trees make it one of the nicer streets in the city, I believe.
Workers took out the two trees closest to the bridge when construction

started. I was afraid the street was going to be widened because of the bridge, and that all the trees would be gone by the time I got back to Liuzhou this year. (Would they then have to change the name to the Broader but Not-So-Elegant Road?) As of this writing, though, the trees are still there. I’ve got my fingers crossed.


Update: The bridge was finally opened to traffic late in 2013. They

only had to tear down the one building, and they didn't take out any 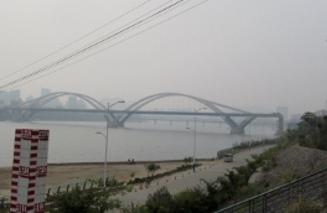