A Liuzhou television station interviewed five Westerners, including me, on the subject "What do Foreigners Think of Liuzhou Drivers?" This was in 2005, and the Party/government/media was gearing up for an expected explosion in car ownership. (I think even my British friends might agree with the use of the singular verb in this instance.)
We were interviewed separately, so I didn't know what the other four foreigners were saying. For myself, I decided to be diplomatic. I made comments like, "There's room for improvement", and "A lot of new drivers in Liuzhou are still learning." I found out later that the other interviewees had been much more honest.
During the interview the reporter said she'd heard that American drivers always stop at red lights, even when there's no cross traffic, and she wanted to know if that were true. I said it was, but she looked so incredulous that I quickly added, "Well, they might run a red light at three or four in the morning when there're no other cars on the road." The reporter looked relieved, as though she were glad to hear that U.S. drivers might have a modicum of common sense after all.
There's no truth to the rumor that Liuzhou drivers back then were taught that red meant "advance quickly". They simply believed that red lights and other traffic laws only applied to the hoi palloi, and need not be obeyed by anyone whose ownership of a car certified membership in Society's Elite. One light in particular was almost always ignored – it was in the middle of a block at a crosswalk in front of a school, and local drivers were seemingly confounded by the idea of having a stoplight where there was no cross traffic. I remember seeing a woman blast through it at full speed one day just after school let out, her horn blaring, scattering children in all directions. She didn't hit any of them, fortunately, at least not that day.
Toward the end of the interview, I happened to mention that pedestrians in the U.S. have the right of way, and that drivers stop at crosswalks when pedestrians are present. "Why on earth would they do that?" the interviewer asked. I probably should have admitted that I'd never thought about it and didn't really know, but instead I made up an explanation: "Well, a car is so much bigger than a person, a pedestrian hit by a car could be seriously injured, so the driver has an obligation to make sure that doesn't happen."
The interviewer was astonished at such a thought. "In China," she said, "big people do what they want, and the little people just have to get out of the way." I'm paraphrasing, because I don't remember her exact words, but what she said was to that effect. And you don't need to spend much time in Liuzhou to realize that she was correct – here, the bigger vehicle has the right of way over everything smaller, and pedestrians are at the bottom of the heap.
So, does "might make right" in China? If you ask them about it, most Chinese will say it's wrong for people with wealth and power to lord it over everyone else. But they also believe that that's the way of the world, and it's useless to try to change human nature. The traffic laws simply reflect the natural order of things, they seem to think, so you might as well grin and bear it. You can comfort yourself with the thought that someday you might own a car yourself, and then you'll be the one that gets to lord it over the Great Unwashed.
I should clarify that when I say "the Chinese", I'm talking only about the ones who live in China Proper, if that's the appropriate term. Chinese people who live in Hong Kong or other places (such as the Unnamed Island off the east coast, or Singapore, or any of the Chinatowns that I've visited in North America) don't

the wellbeing of their fellow citizens. Witness this sign from that "Island to be

Named Later", reflecting a rule which is in fact obeyed religiously even by

motorbike drivers.
And that makes me wonder: What does the mainland lack, that those other

areas have, that encourages people to behave with such civility? Or maybe it's

lack, that allows people of wealth and power to act with such impunity? That's

something to consider the next time the Party/government/media organizes

one of its "Let's Act Civilly" propaganda campaigns. 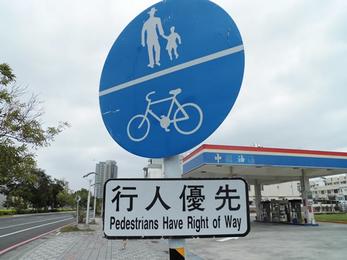