Many people these days attribute "Stroll on the Grass", "Swing on a Swing" and other traditional activities to the Qingming [or Grave Sweeping] Festival, but that's mistaken. During the Qin and Han Dynasties, the year was divided into twenty-four periods identified by solar terms. Qingming [which literally means ‘warm and bright’, signifying the start of spring] is one of those periods. It is an agricultural festival with no other meaning.
But the Hanshi or Cold Food Festival originated in [more] ancient times. It was known as the "Sacrifice to Fire Festival" and occurred one hundred and five days after the winter solstice on the traditional Chinese calendar, that is, one or two days before the Qingming Festival. On that day the ancients would set up an altar and offer libations to the god of fire. They were not allowed to light cooking fires – the idea was that the god of fire could attend a banquet as a guest without having to work. Since cooking fires were banned, they had to eat cold food, so the festival came to be called "Cold Food Day."
During the Spring and Autumn Period [771-476 BCE], Jie Zitui declined the offer of a reward from Duke Wen of Jin and carried his mother on his back to hide in the mountains. The day he left home happened to be the Sacrifice to Fire Festival, so he carried cold food with him. In order to memorialize this loyal follower, Duke Wen of Jin issued an edict that, every year on this day, lighting fires was prohibited. Every household had to eat cold, raw foods. This is when "Cold Food Day" officially became the "Cold Food Festival".
The Cold Food Festival is right when the warm, spring weather starts and the flowers bloom. People going to offer sacrifices at the graves of their ancestors would pick flowers and greens,

and stroll around to enjoy the scenery. This gradually developed into the

times. Many games were played, and Dang Qiuqian or “Swing [standing up]

on a Swing” was a widely popular one. Why should swinging on a swing be

part of the Cold Food Festival? One theory is that the soul of Jie Zitui the

Righteous [see above] rode up to Heaven sitting on a swing, but research

has found no evidence to support this. It's a myth, nothing more.
The Yiwen Leiju (Encyclopedia of Arts and Literature) compiled by Ouyang Xun during the Tang Dynasty records that "The Rong tribes of the mountains in the North use swings to play games on Cold Food Day." We have only this is to explain the relationship between swings and the Cold Food Festival.
Later swinging on swings became a favorite pastime of concubines in the emperor's palace. The reason successive emperors liked swings is that the Chinese word for "swing" is written using the characters for "thousands of autumns" (秋千), thus signifying that the Empire would last forever.
Many essays by ancient literati sing the praises of swings. The poem "Swing" by Song Dynasty monk Hui Hong is the most popular:

The fluttering, blood-red skirt drags across the floor,
He of jade countenance forfeits life and ascends to Heaven.
Pink apricot flowers tell of being drenched in the rain,
Colored ropes hang from green poplars in the mist.
Those who came to the playground stand calmly by,
Suspecting that the Moon has banished the fallen immortal.

When one has finished reading this poem, one feels as though he has been watching a blushing beauty, her face full of smiles, cavorting in the swing yard.
It is said that Tang Dynasty Emperor Li Shimin waved his sleeve and sighed with emotion over his concubines swinging on swings under the shade of green trees in the swing yard. He called it the "sport for demigods".
Also, beginning in the Tang Dynasty, swinging on swings during the Cold Food Festival became popular, not just among royalty, but among the people as well. Even the privileged daughters

of large households, who were confined to their boudoirs to read history

books and practice embroidery, loved swinging. Like birds escaped from the

cage, they would dance gaily and gracefully around the swing yard, and the

loneliness and melancholy of previous days would dissipate. For this reason,

After this activity became popular among the common people, couples

were permitted to swing on swings without keeping a separation between

men and women. This allowed adolescent boys and girls an opportunity to

reveal their feelings to one another, and swinging became the "go-between

of love". Examples include the popular love songs, "Sisters dress up to flaunt

their extraordinary beauty while young men throw ropes up to make

swings," and "Swallows fly overhead in pairs, while my fellow and I sit on a swing," and so on.
In my childhood, swinging on swings was an extraordinarily lively activity. The swing at the head of our village, as recorded in my memory, seemed to insert itself into the sky. It was an extremely tall structure and, when it started to swing, the creaking and straining was like a song. To win the favors of the girls, the young men would all posture as they drove the swing through the whistling wind.
In the alley where I lived, the fellow who was counted as the best swinger was Dog Egg. He'd clasp the cable with both hands and, after swinging up to the high point of the arc, he'd coil up his legs and then extend them with all his might. Driving the swing this way made the arc get bigger and bigger until it could exceed one hundred eighty degrees. That's why the older girls and the young wives all liked to get on the swing with Dog Egg. Because of the swinging, he got along well with the pretty girls and young lasses.
Swinging on a swing is exhilarating. It takes your breath away and [gives back] unlimited joy. Every moment on a swing is filled with adventure. Because of this, the villagers say that swinging is one of the "three suspends" (along with riding a horse and sitting in a boat). People have broken their arms and scarred their faces from swinging on a swing [or more accurately from falling off one]. But thrills are fun, and so what if you look foolish. Neither affects people's attraction to swings in the least. In those days, when I was young, ropes were tied in front of every house, with a seat made of grass on them, to make small swings for children to play on.
But things change with time, and the past is like a wisp of smoke. Fires are no longer taboo during the Cold Food Festival, and swinging on swings is becoming less and less associated with the holiday. Only the Cold Food Festival activities of Stroll on the Grass and Ji Sao [Sacrificing to Ancestors and Straightening up Their Graves] are still practiced, and they are now said to be the outdoor stroll and grave sweeping of the Qing Ming Festival. So, how did these changes come about? First, it's because the two festivals occur one right after the other and have been confounded. Second is because of the influence of people who moderns consider famous. For example, the Tang Dynasty poet Du Mu wrote these excellent lines in his poem, "The rains are disordered and confused at Qing Ming time," and the renown of the Cold Food Festival has gradually declined. 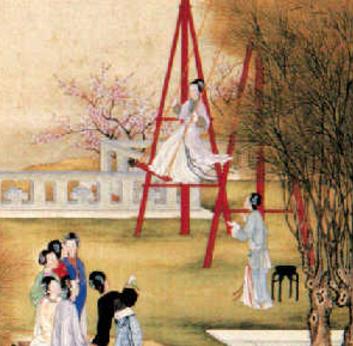 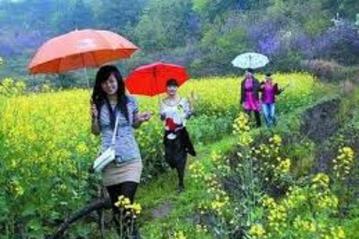