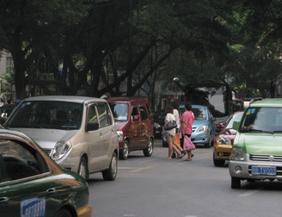 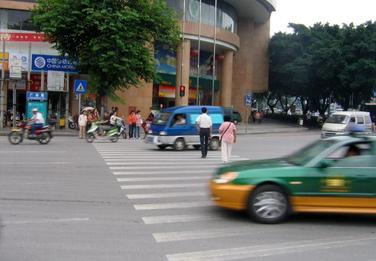 I get a physical and mental workout every day in Liuzhou, just by crossing the street.

It's customary in Liuzhou to cross streets lane by lane. First, step into the street as close to the oncoming cars as possible and wait for a break in the traffic. Dash across the first lane as soon as the opportunity presents itself. Wait between lanes for another break and, when possible, scoot across the next lane. Continue in like manner until you've reached the other side of the street.
Jay-walking is normal and pedestrians pay no attention to traffic lights. Drivers pay little or no attention to lane markers, so you have to stay alert and ready to dodge. Also, drivers won't stop for pedestrians unless forced to do so (and maybe not even then). Cars have the right of way over pedestrians, so drivers expect you to stay out of their way and will be surprised if you don't. Believe me, there are few things more dangerous than a surprised Chinese

driver.
Drivers can make free right turns against the red legally, just like in most

U.S. states. Unlike the U.S., however, they’re not required to stop before

turning. The corners are rounded so they don't even have to slow down much,

and in fact they usually don't. Also, the turn lights for cars change to green at

the same time the pedestrian walk lights do. Thus, even when you're crossing

the street with the light in a crosswalk, you're not safe.
At the intersection pictured on the right, two one-way streets come

together from opposite directions, so all cars have to turn. Pedestrians crossing

On October 15, 2012, Fannyi wrote: I saw a news report on Chinese TV last night (12/10/14) called “Crossing the Street, Chinese Style”. It showed video of people jaywalking and ignoring red lights in a number of Chinese cities. The highlights were when the reporter stopped people in the act and asked them why they weren’t obeying the traffic laws. They all looked at him like, “What, are you crazy?” 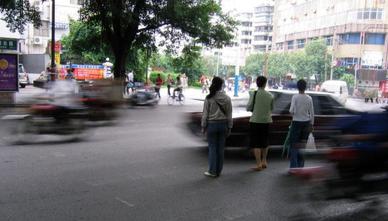 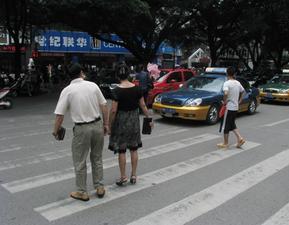