Dance Til You Drop

Westerners who come to China expecting to see new and unusual things are seldom disappointed. Even things that look familiar at first glance often turn out, on closer examination, to be quite different from what we're used to.
Take ballroom dancing as an example. Just about any public park

you visit, on just about any morning, will be crowded with people

doing their version of Dancing with the Stars. I once went to a park

in Beijing during January, at 6:30 in the morning, when the

temperature was around freezing, and there were at least a hundred

people there dancing. (My excuse for being out at that hour was jet

lag – theirs was just plain dedication, I guess.)
There are indoor dance clubs, too. In Liuzhou a couple of them

open in the morning and go straight through until late at night, so

you can get your dance fix almost anytime you feel the need. They

have a reputation for being rather seedy, however. When I first came

to this town, I asked around for almost a month before I found

someone who would even admit knowing that such places exist.
The dances look familiar at first: waltz, rumba, east coast swing, etc. A few years ago the hustle was all the rage here in Liuzhou, and this year everyone seems to be doing the cha-cha. But their approach to these dances is very different from ours. For one thing, the main reason people dance here is for exercise. This means that, while a typical dance number might last three or four minutes in the States, in China you might be out on the floor (or the concrete) for twelve to fifteen minutes. It's like endurance training at the gym.
Also, there's much more emphasis on styling than even at an Arthur Murray Studio in the States. I think this is a carry-over from traditional Chinese opera, where the dancers often "strike a pose", and minute differences in the dancer's hand position, for example, can make the difference between a good and a bad performance. In the U.S., a dance instructor might tell you to "throw your hands up in the air and have fun." Here the instructor would tell you to "raise your hands at an angle of 117 degrees to look like you're having fun."
I'm exaggerating, of course. But not by much.
You'll also see people in the parks doing line dancing, but again, it ain't like they do in Texas. The steps are choreographed to emphasize grace and poise rather than dexterity and exuberance. I imagine that's why you almost never see male line dancers in China; maybe one or two of a hundred line dancers are men. (For ballroom dancers, it's usually more like one out of three.)
I only remember one time when I saw Chinese dancers really "get into" the music. It was in Beijing, at an afternoon session of the Long Marchers Square Dance Club. There was no caller – they used tape recordings of American callers, and they'd danced so often to the same tapes that they had them memorized. I'd be standing there waiting for the caller to tell me what to do while everyone else had already started doing it! I had a great time, and especially enjoyed seeing the Chinese tap their toes and bob their heads. 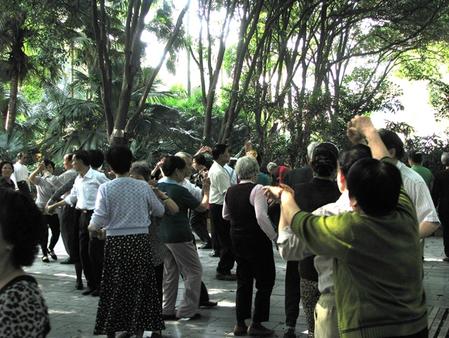