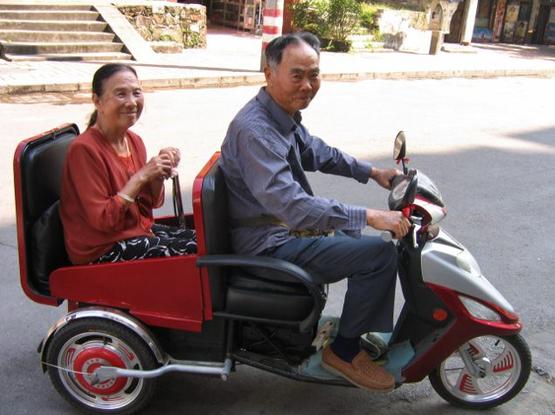 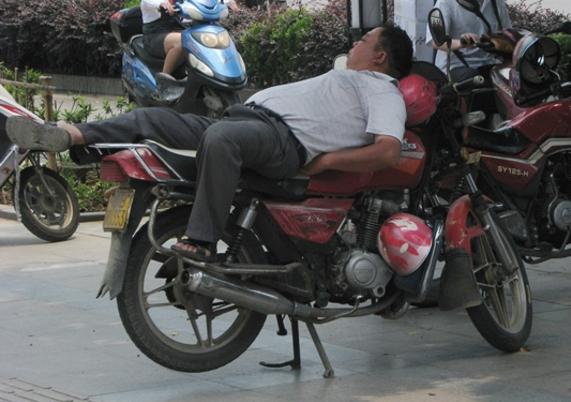 Here are two of my favorite pictures from Liuzhou.

I took this one in August 2007. These young (at heart) lovers had just bought their new motor-trike when I met them outside the store. It was the first vehicle they'd ever had. They were so excited, they talked my ears off about how they were going to drive around visiting their kids and having fun. I saw them again in 2011, but didn't have a chance to talk. I was riding on a bus and they were tooling down the street in the other direction, still looking pleased as punch.
One reason I like the photo so much is that the lady reminds me of Ruth Gordon, the actress who played the lead role in the movie Harold and Maude.
The other photo involves a “motorbike taxi.” In Liuzhou, men with motorbikes congregate around bus stops waiting to give rides to people who don’t feel like walking the rest of the way home when they get off a bus. The price is negotiable but usually between 2 and 3 Yuan (32 to 48 cents) per mile. I rode one once and that was enough – the guy wasn't used to having so much weight on the back of his bike, so it was a very wobbly ride.
And what do these guys do while they're waiting for customers?

One of the translations added to Chinese-Stories-English.com this week is about another young man who decided to take a nap on his bike -- in the middle of a street! Story #6 here.