This is the protestant church on the north side of Liuzhou. They say they have over a thousand people come to services every Sunday, but I’ve never actually gone to look. There’s another congregation on the south side of town, but they don’t have their own building.
The church is affiliated with the Chinese

Christian Church, an organization with

parishes all over the world, including the

U.S.A. They are very fundamentalist, but for

some reason they never say anything bad

about the Chinese Communist Party. On the

other hand, they're not shy about telling you

how evil the Catholic Church is. What's that old quote about a feud between brothers being the most hateful?
I was talking to some members of a congregation in the U.S. last summer. The preacher’s wife asked me what I knew about the history of Christianity in China. I mentioned the Nestorians and the Jesuits, but suggested that Christians had never really had a significant presence in China (unless you count the Tai-Ping Rebellion, whose leader claimed to be the brother of Jesus Christ).
She looked a little dubious at the idea that Jesuits are Christians. She then shared what God had revealed to her: that Jesus had sent an apostle to China shortly after the crucifixion and that Christianity had had a huge influence on the development of Chinese society thereafter.
Another lady shared that the emperor Kang Xi (r. 1661-1722) had been a True Believer in Christ. When he issued an edict in 1715 barring Christian missions in China, he really meant to ban only the Catholics.
Finally, a man shared that Chinese civilization had been “engendered” by one of the lost tribes of Israel. (He’s a Caucasian; I don’t think many Chinese would agree with him.) I didn’t stick around for the rest of the conversation. I mean, who am I to argue with the Revealed Word of God?
By the way, the U.S. branch of the Chinese Christian Church has produced a DVD describing how ancient Chinese thinking, as expressed in the Four Books and Five Classics as well as other sources, is consistent with Judeo-Christian doctrines. Their premise is that Christianity is not really a “foreign” religion at all, so Chinese people should feel comfortable about joining. I’m sure you can get a copy of the DVD from your local parish if you‘d like one.

12/16/2012 Liuzhou Laowai wrote: I have been to look - about four years years ago. The congregation was less than 50 and half of them were beggars. A thousand sounds like fantasy unless something remarkable has happened.

By the way there are several 'churches' around town. I have come across at least three other than the permanently housed ones. Not that I am in the least bit interested.

I much prefer the Catholic church. At least they had the decency to build it in Liuzhou's major red light district and rent out 90% of the building to a KTV and short time hotel. Class.


3/19/2013 Alan wrote: I have attended this church on Sunday mornings in the past. I would guess at about 300+ in the congregation.. with just maybe 1 or 2 beggars outside.

Fannyi's Comment: I believe they have two services on Sunday mornings and one Sunday evenings. If they get 300+ at one of those services, the "over a thousand" estimate for total attendance is not unreasonable. 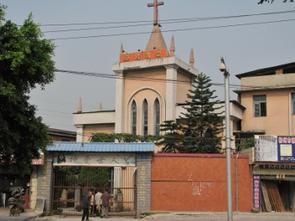 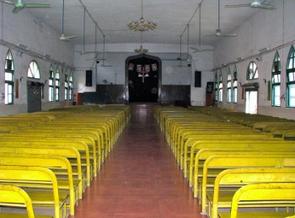