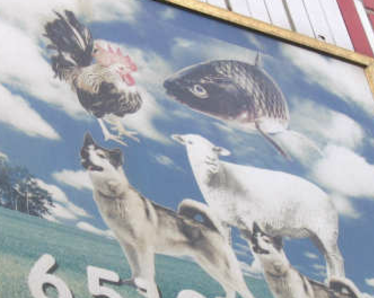 The signs in front of Chinese shops often display pictures of the products and services offered for sale within. You might wonder at first whether the sign at the right is for a veterinarian's office, or maybe a pet

store, but of course it isn't.
Yes, it's a restaurant, and Chinese people do eat dog meat. Well, at least

some of them do – many others are disgusted by the idea. Laopo and her

family, for example, won't touch the stuff. She tells me that people who were

have recently moved to town from the countryside have a taste for it. (I

personally don't think she's right, because some of my former students were

city residents who waxed poetic about how tasty and nutritious "Mulligan

mutt" and "canine kabob" can be.)
Rest assured, though, you can go out for a night on the town here without

worrying that your dinner might be tainted by someone's pet. Most

restaurants don't serve dog meat, and those that do (maybe ten percent of all the restaurants in town, by my rather haphazard count) are typically "greasy chopsticks" type places that Westerners seldom frequent anyway. If you do go to one, dog dishes will be clearly identified as 狗 on the menu, so just make sure someone in your party can read Chinese well enough to recognize it.
In the United States, buying, selling and consuming dog meat is prohibited by local law in most jurisdictions. There are exceptions – domestic canines may be eaten on some Indian reservations, and consumption of wild canines (i.e., coyotes) is legal in many states. Generally, though, the mere mention of eating dog meat will be met with open hostility. (See, e.g., this CNN report written by a supposedly objective journalist.)
Along the same lines, there's been some controversy in the U.S. lately about restaurants serving lion steaks (unstated price) and lion tacos (at $35 a pop). Protesters claim that lions are a threatened species (they aren't), but the restaurant owners say they buy the meat from a ranch which raises lions specifically for the exotic food market.
That contrast in attitudes is the point of this post. In the United States, we're willing and even eager to use the power of law to force people to change their eating habits to conform to our personal moral views. In China, on the other hand, while people may be disgusted by the things their neighbors eat, they feel no need to prohibit their culinary habits by law. Which leads me to wonder: Which of our two societies is really the more "civilized"?
I should mention that Chinese attitudes may be changing. Recently, for example, a public protest attempted (unsuccessfully) to shut down a dog meat food festival.
As for restaurant signs like the one above, I took that photo in September 2007. The restaurant was on the outskirts of Liuzhou, and the sign was one of the last ones remaining around town. The others had all been taken down that summer and replaced by signs saying "dog meat" in Chinese characters, with no pictures.
The city government was expecting an influx of foreign tourists for a water sports festival that autumn, but I'm sure that had nothing to do with the sudden disappearance of the illustrated signs. They probably just wanted to encourage literacy.