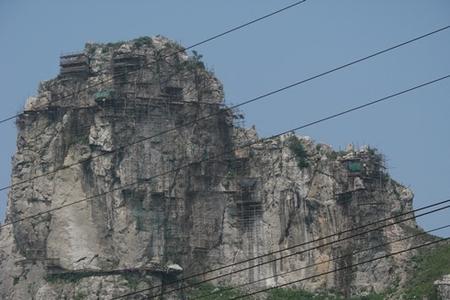 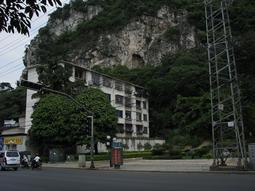 ​​​      There are maybe 30 mountains within the city limits of Liuzhou – I’m not sure, I lost count. However, the city is as flat as the proverbial pancake – you could ride your bike around town all day and never encounter a significant hill. It's because most of the mountains stick up like giant pieces on a chess board, and the city is built on the flat ground between and around them.
The first picture was taken from the top of Business School Mountain looking north toward downtown. The second was taken from the cable car on the way up Saddle Mountain, just across the river from downtown.

The third picture is Arrow Mountain, also near downtown. I climbed to the top one day when I was younger. Two years ago, I think it was. There's a paved path all the way, so it wasn't difficult, even for an FFG (Fat Foreign Guy) like me. It took less than half an hour. The hardest part was the top five feet of the stairway near the top. (You can see the stairs on the right side of the picture.) It's so steep I literally had to climb the stairs on all fours, while ducking under a tree

limb to boot!
Well, there was one other hard part. About halfway up I passed a fairly large cave where

some people were singing Traditional Chinese songs. High squeaky music in an echo

chamber. I still shudder at the memory!
Sometimes buildings, roads and sidewalks are built right up alongside the mountains, as

pictured to the right. This creates problems because the mountains are soft limestone and

have a tendency to flake.
The following picture is a mountain behind a government office building in the south part of town. The building was finished a couple of years ago but has not as yet been occupied because of the danger from falling rock. A wag suggested that the government bureaucrats should just move right in and hope for the best, but cooler heads prevailed. A crew of about 30 workers has been working to chip away the flakey stuff and shore up the rest. You can barely see the scaffolding near the top of the mountain.
How do I know the number of workers? The lunch whistle blew just as I was taking this picture and I counted them as they walked down. It took them 40 minutes. 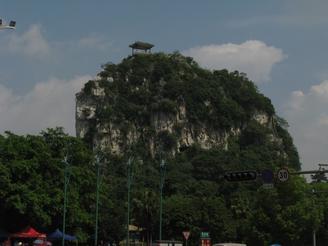 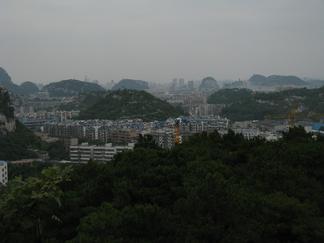 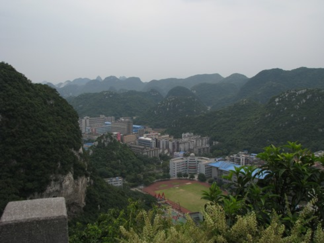