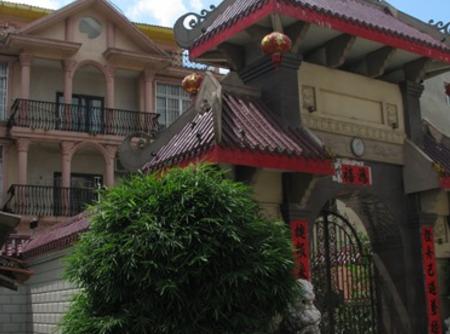 Land is at a premium in China, so buildings go up instead of out. Ranch style houses are very rare; most people in the cities live in high-rise condos. Peasants in the countryside…. Er, excuse me, I should have said "farmers" – "peasant" is no longer politically correct. Anyway, those people sometimes have single-family houses, but even these places are “high-rise”.

The family that lives in the place on the left is pretty well-off. I walked around the back and noticed a wall air conditioner on the third floor (the master bedroom, I assume) and a satellite dish.

Their next-door neighbor, in the center picture, is not so prosperous, but a nice house isn’t everything. I mean, if you have to live in a hovel, you could hardly pick a more scenic location. (I know someone was living in the shack in front of the wall because there was some laundry [which can't be seen in the photo] hanging

outside to dry.)
A little farther down the road is a row of apartments where most

of the people in the village live.
The last picture, the mansion on the right, is across the street

from the apartments. It is presumably occupied by the "Jones family"

that everyone is trying to keep up with. I wonder if Mr. Jones is a

Communist Party member.
These pictures were taken in Southside Village, four miles or so

(and a world away) from downtown Liuzhou, but still within the city