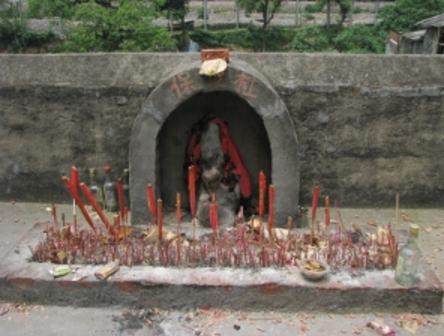 Before Daoism or Buddhism, and long before Christianity or Islam, the ancient Chinese worshipped local spirits who inhabited trees, streams, rocks, etc. By "local" I mean really local, like the area of a rice paddy or two. This ancient animism still has adherents today, as you can see from this altar just across the river from downtown Liuzhou.

It’s called the “Preserve Peace Altar”. There's a rock in the alcove with a vaguely human shape, draped in a red cloth like a shawl. The bits of red paper strewn around are the remains of firecrackers from some kind of celebration. I've been visiting this place periodically since 2005 and have never seen anyone actually worshiping there, but the red incense sticks in front are replaced regularly, and I've often seen fruit left out as an offering. On the day I took the picture on the left above, in April 2011, the offerings were some cakes and a bottle of rice wine with only a couple of swigs left in it. (I'd be mad if I were the deity – Who drank all my booze?)
The altar is within a quarter-mile of two modern housing developments, one of

which is middle class and the other definitely upper, if you please. The altar sits in

bottomland used to grow crops, and the low-lying nature of the land is what keeps

the developers at bay – or at least that’s what I thought. In the following picture from

October 2012, however, you can see construction equipment starting to fill in the

bottomland behind the altar. I don’t know what’s in store for the place. A Hilton Hotel

would surprise me, I guess, but only a little.
On top of the wall surrounding the altar are pieces of paper held down by rocks. I

asked a local guy what the papers were and he said something about offerings every August to keep the neighborhood safe. (The Lunar calendar August Moon Festival fell on September 30 this year.) He said a lot more but his local accent was too thick for me. Laopo says the papers represent money which is being offered to the deity.
When I visited in April 2011, I discovered a new altar that had been built about 100

meters away from the old one. It was called the “New Peace Altar”. The vertical words on

the left and right, respectively, say: “May the country prosper and the people be at

peace”, and “May we have good weather for crops”. The pictures are the Lord and

construction equipment back behind the old altar.
And finally, here’s your CHINESE LESSON FOR THE DAY. This type of altar is called

a “she”, pronounced like “shut” without the “t”. In the Song Dynasty, about a thousand years ago, villagers would gather around these altars for what we would call today “town meetings”. (See Society and the Supernatural in Song China by Edward L. Davis.) The ancient Chinese called them “she-hui”, or “gatherings by the she”. That term eventually came to refer to the people who gathered around, that is, the local “community”. In modern Chinese the meaning has been further extended to encompass “society” as a whole. Thus, the term for “socialism” in modern Chinese, “she-hui zhu-yi”, literally means “the altar gatherings doctrine”. I wonder what Karl Marx would think of that.

Update: The altar was still there as of March 2013, and the building behind it had been finished. It turned out not to be a Hilton after all, just a large storage shed.

Update #2: I visited the She today for the first time in five years. As you can see, the old buildings around the altar have been demolished (and the new storage shed as well) and the area is covered in debris. I'm not sure of the reason for all this urban renewal, but it may have something to do with the new high-speed railway overpass you can see in the background.

I risked life and limb (well, limb, anyway) to crawl over the debris for a closer look. The falling buildings took some chips out of the stairway to the altar; the red cloth around the goddess has been replaced by a red plastic tarp; the sand box (for holding incense sticks) is overgrown with weeds; and I saw no sign of fruit, booze or other offerings. There were incense sticks in the sandbox that looked recently burned, though, and it's been sort-of swept, so I guess someone still cares about the place.

​     Think I'll wait until I'm a little younger before visiting the She again -- or at least until the junk has been cleared away. 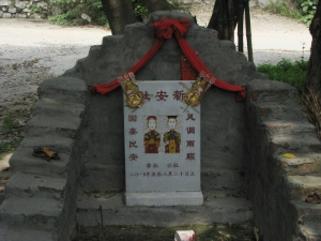 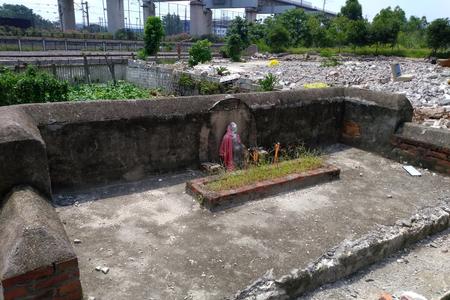 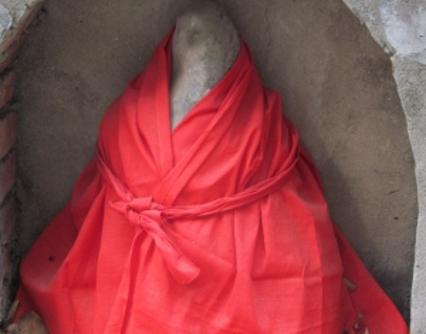 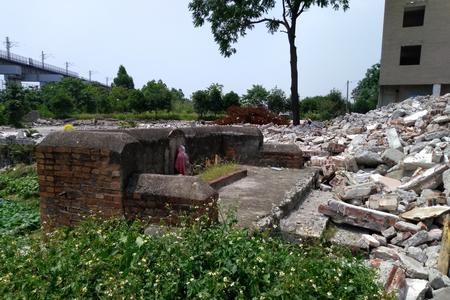 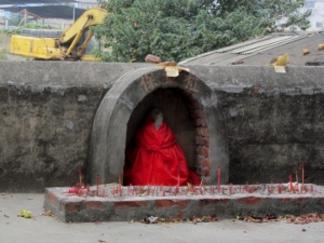