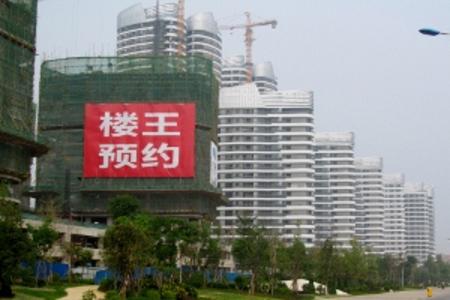 A zinc processing factory used to occupy a prime site by the river just north of downtown Liuzhou. In 2006 the company moved out to the boonies and the factory was torn down. Rumor has it that the city government forced the company to move for the stated reason that it was producing too much pollution too near town.
The land sat idle until 2010. Almost nothing grew there in the time it was vacant, except for a few scattered weeds, which is unusual because Liuzhou is one of those places where you can grow a tree just by sticking a toothpick in the ground.
There's something growing there now, though: A planned community of 30 or so high-rise buildings, with fancy boutiques on the first two floors and condos above. Currently six or seven of the proposed buildings are in various stages of construction, with the rest still in the planning stages.
The trees were shipped in and transplanted fully grown. The sign

most of these condos, if you crane your neck.
I went into the sales center and asked a rep if there was any

reason to be concerned about ground pollution. She said no, the

city government had thoroughly inspected the land before granting

a building permit. Well, that sure made me feel better. Not good

enough to want to buy one, though.
Later I talked to one of the drivers who ferries prospective

customers from the sales center to the model units. He said the builder had cleaned up the site by scraping several inches of dirt off the surface and replacing it with clean soil. That explains why nothing much could grow there, he claimed, what with all that work going on. Such a smooth talker ought to be on the sales staff, I think, but they only hire pretty young women for that job.
Still later I asked a cab driver about the place and she said, “What factory?” She had just moved to Liuzhou a couple of years ago.
By the way, the developer is apparently the son of one of the highest ranking members of the Chinese Communist Party, a person with enough clout to get the local government to do whatever he wants.
If you’re in the market, the condos come in various sizes from 50 to 170 square meters (538 to 1,938 square feet). The 83-meter unit (893 sq. ft.), which is the one I pretended to be interested in, sells for ¥705,500 ($112,800), plus assorted closing costs. For that you get a concrete shell which you must “decorate”, i.e., install the plumbing, electrical, flooring, wall coverings, etc. Figure a minimum $20,000 for that, and probably a lot more, bringing your total cost for an 893 sq. ft. condo to at least $135,000. (The largest unit would be somewhere around $300,000 minimum.)
One more point to consider: You can buy the condo if you want, but you can’t buy the land it’s on. This is a communist country and the land belongs to The People. With your concrete shell you will instead get a 70 year lease to an undivided interest in the realty. The government has not yet decided what will happen when the leases expire.
A bit pricey, perhaps, but not the most expensive development in Liuzhou. In fact, you might even consider it a downright bargain when compared to real estate in Shanghai and the other big Chinese cities. The potential long-term health hazards are, after all, only potential.

May 2019 update: The development has been completed and all the units have been sold. On the resale market, the US$135,000 unit discussed above will set you back around US$175,000, an increase of about 1/3 over seven years. Not bad. (The costs of health care were not included in these estimates.) Still no word on what will happen when the 70-year leases expire.

April 2022 update: This is not an exclusively Chinese situation. A residential development on a leafy street in an upscale Washington DC neighborhood is built on what was once a World War I chemical weapons dump. See this article.