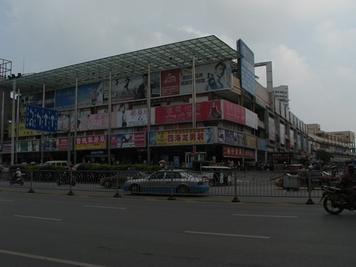 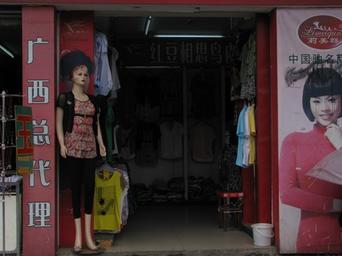 This is one of the 12 buildings that make up the Flying Goose Mercantile Center in Liuzhou. At least I think there are twelve of them – I kind of lost count as I was walking around. This looks to

be the largest one, but the others are only slightly smaller. All of them are

crammed with tiny little shops, maybe 200 to 300 square feet per shop on

average. Your guess is as good as mine as to how many of these shops there

are – certainly several thousand.
It's primarily a wholesale

market.  (The store on the left

proclaims itself the province's

exclusive agent for a

particular brand). The shops are

quite happy to sell at retail, though, and the price is always negotiable. Most of

them sell clothing and accessories and the rest sell carpets, draperies, bedding

and other stuff for the home. There are similar (but smaller) wholesale markets                                                                                  around town for packaged foods, hardware, computer equipment, small electrics and other things.
WARNING: BORING FACTS FOLLOW, READ AT YOUR OWN RISK. According to the 2012 census as reported on Wikipedia, 1,029,946 people live in Liuzhou City. This makes it either the 55th or 57th most populous city in China, depending on which Wikipedia article you look at. It would rank tenth in the U.S., right after Dallas, Texas.
The city is part of Liuzhou Prefecture, which has a population of 3,758,700. That would make it the fifth largest county if it were in the U.S., well ahead of San Diego County, California.
And about 20 million people live in small towns and villages within a couple of hundred miles of Liuzhou. ("Small towns and villages" means something different in China than in the States. A "town" could have several hundred thousand people, and a "village" could have tens of thousands.) BORING STATISTICS FINISHED, PLEASE RESUME NORMAL READING.
Liuzhou is the main distribution hub for this entire area, which is why it has so many wholesale outlets. Retailers from the surrounding towns and villages come into “the big city” to stock up on merchandise for their shops. For the same reason, Liuzhou also has more flophouses, eateries and liquor stores per square foot than any other place I've ever lived. All those merchants need somewhere to eat, sleep and be merry while they're here on buying trips.
Here’s an article about what’s been happening recently in Chinese wholesale markets.