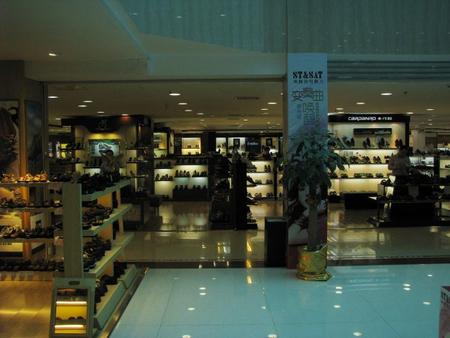 Last time I wrote about dancing as an example of something that seems familiar to us Westerners in China but, on closer examination, turns out to be rather different from what we're used to. Here's another example: shopping in a department store.
After you've finished your morning dancercize session here in

Liuzhou, you can waltz on over to your choice of several

department stores. When you walk in the door, you might at first

of fashionable clothing and accessories displayed in the glitziest

capitalist manner. But then you notice that each department in the

store (shoes, in the above photo) is divided into smaller sections,

each selling one brand of merchandise, and the sales clerks in

each section wear uniforms different from the clerks in other

sections.
If you ask a clerk in one section for a particular product (say,

brown loafers) you might be told that they don't have any. Then

you walk over to the next section and, surprise, you might see several pairs.
It turns out that each section is a private business, run by an entrepreneur in competition with the others. The store itself is owned by one entity (usually the government but sometimes a group of real estate moguls) which leases out space to the individual shopkeepers. In other words, it's more like an upscale flea market than a department store.
If you buy something, the sales clerk will make out a ticket for you to take to a central pay station. The clerk at the pay station, who is employed by the store owner, accepts your money and the ticket and fills out a receipt in triplicate, one copy for you, one for the shop making the sale, and one for the store. You take the receipt back to the sales clerk and exchange it for your merchandise. This system allows the store owner to keep track of the gross receipts of the individual entrepreneurs for purposes of (I assume) calculating the rent.
It's a bit of a hassle traipsing back and forth between the sales clerk and the pay station, but, still, the system works much better than the way things were done thirty years ago. Back then the entire operation was owned and operated by the government. When you entered the store you'd encounter a raft of featherbedded employees who were far more interested in chatting with their coworkers than in selling anything to you. All the merchandise was kept in glass cases or behind counters – if you were thinking of buying something you had to ask a clerk to bring it out so you could look at it.
The central pay stations in those days were staffed by two or sometimes even three clerks, each of whom would separately count the money you had given them, and the change you were to be given, and make a record of it. The purpose of the system back then was (I assume) to prevent employee theft.