If you like small business, you’ll love China. A street vendor is about as small as you can get, and China has millions of them. Here’s a few from Liuzhou.
This one (you can see her leg on the left side of the photo) was

selling snake oil in front of Saddle Mountain Park in Liuzhou. The

critters were real but dead and dried out. The snake oil was

would relieve pain anywhere on your body, but especially the

lower back.
The bowls with black liquid in them are "testers". The vendor

was inviting passers-by to daub some on wherever it hurt, and if

it didn’t work, they didn't have to buy. The guy in the upper right

had just rubbed some between his toes, for athlete's foot, I guess,

and he bought a bottle after he got his shoes back on. I had a bit of a headache but decided not to try the stuff.
China has regulations to govern sales of medicine but is lax on enforcement. Officials get interested if people die after using a product, but aside from that, the rules are often ignored in favor of "let the buyer beware." Even buying from a drugstore can be risky, let alone a street vendor. Many locals find one drugstore they trust and never shop anywhere else.
In the U.S., Tea Partiers want to promote small business by getting rid of regulations, which I think would make the U.S. more like China. The next time someone tells you that regulations are throttling American businesses, ask them to specify which particular regulations they don’t like. Pin them down and

don’t let them get away with generalities, unless you like snake oil.
This guy had a neat little scam going. He had a small cardboard

look. The same numbers were written the same way on a piece of

paper on the ground. The guy would flip the disc into a bowl and

quickly cover it – gamblers would guess which number had landed

paper. Strangely enough, the number with the most money on it

almost always seemed to lose.
I couldn't get a good picture because the guy started to pick his

stuff up as soon as I pulled out my camera. I think maybe his dog

warned him. He was right back at it after I walked away, though. I

tried to find him again a few days later, to sneak up and get a

better picture, but he’d disappeared. I assume he moves around

dissatisfied customers).
The bald guy in the robe is a Buddhist monk. He was selling

front of his table says “A Lifetime of Peace.” The lady had just

on her wrist. (I don't know if he charged extra for the prayer.)
I usually ask for permission before taking photos of people, but

I didn’t this time. Maybe I was thinking of my experience with the

gambler. Anyway, the lady was justifiably unhappy with me. She apparently didn’t like being caught with her superstitions down. I wonder if she thinks that praying to Buddha is more effective than praying to Jesus. 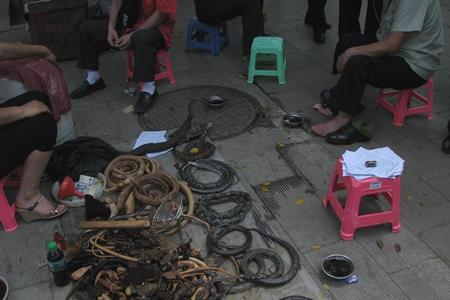 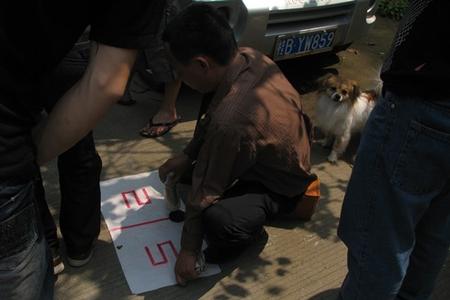 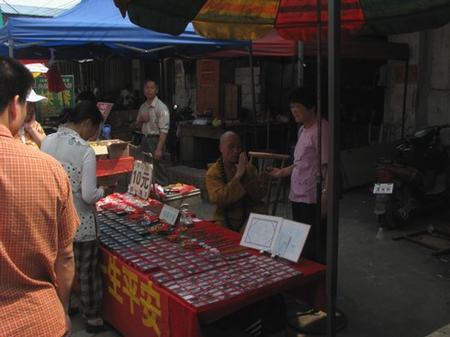