Shortly after I first came to Liuzhou in September 2004, a beautiful young girl on a bus stood up and offered me her seat. That was my first time and it was a bit of a shock, but I was able to laugh it off, even when it happened several more times over the years. Then, on three occasions in 2011, middle-aged women offered me their seats. That was no longer so easy to laugh off. I was starting to think those seven years had been tougher on me than I realized!
Then, one day, I got on a crowded bus during rush hour. A 20-something boy looked me up and down, apparently trying to decide whether to give up his seat. He chose not to, so I had to stand. At the next stop a man in his eighties got on and the kid jumped up, but the old guy (or "old head" as the Chinese say) motioned him to sit back down, and squeezed by me toward the back of the bus. A couple of stops later I felt a tap on my shoulder. It was the old guy. Someone had got off the bus and he was pointing for me to take the seat.
Sheesh! I've now been offered seats by numerous young girls, three middle-aged women and one old geezer. Must be time for a face lift. (I declined the old guy’s offer, by the way.)
Anyway, here’s a picture of a Liuzhou bus – not during rush hour,

so there are plenty of seats. Note the TVs behind the driver and

near the back door. The bus company installed them on about a

them were broken. Too much vibration. In 2008 they started to

install a sturdier model and so far, so good. The TVs are closed-

circuit and show mostly advertising, but they do show a series of

ride.
Not that the cost is all that much. Most routes are one Yuan

whopping 1.5 Yuan. No transfers, but you can get just about anywhere in at most two rides. The busses run every 5 minutes or so on the popular routes and every 15 to 20 minutes on the rest.

9/9/2012 Fannyi wrote:
Thanks for the update.
Looks like fares have gone up since last year. I better take some extra money with me when I go back this year.

09/27/2014 Fannyi wrote:
I spent most of 2013 living near the edge of town. The bus I took to get downtown was coming in from a farming area and was always crowded with people formerly known as "peasants". Not once on my almost daily trips did anyone on that route offer me a seat. Seems like the Party's campaigns to teach people "civility" (文明) haven't yet reached the countryside. 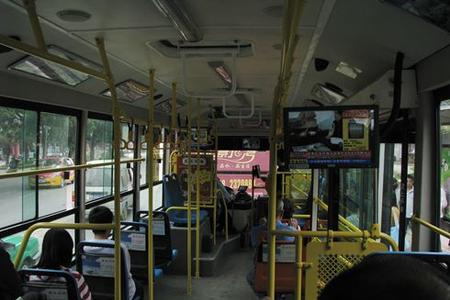