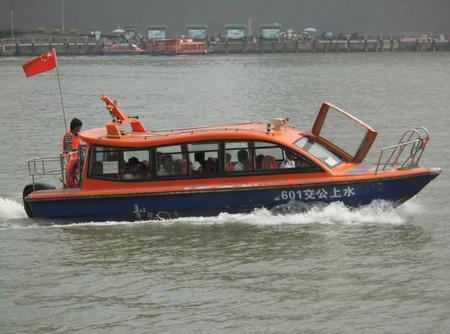 Up the Liu River

Last March Liuzhou initiated a "Waterborne Public Transportation" system (水上公交). Passengers can ride these boats from one side of the "pot" to the other for the tolerable sum of ¥3 (about $0.50) per ride. The "pot" is local slang for the area inside the horseshoe bend in the Liu River, including downtown Liuzhou, which is bounded by the river on three sides.
Despite the name, the boats are obviously not intended to be a

practical part of the city's public transportation system. If your only

goal is to get from point A to point B, the regular buses will meet

your needs more quickly and cheaply. Rather, they are intended for

excursions along the river, half tour bus and half speedboat ride,

tourist destination.
As excursion boats, the system has some merit. Certainly a trip

down the river could be quite refreshing on a scorching summer's

day. Even in the depths of winter, the chance to see the city from a

new perspective would be well worth the ticket price. (Just make

sure to dress warmly.) Liuzhou does have some larger tour boats,

but they operate at a more leisurely pace, primarily at night, so

passengers can view the city lights. Fares start at around ¥50, cheap but still prohibitive for many of the locals.
Given the low price for a ride on the "Waterborne Public Transportation", I wonder whether the system will earn enough revenue to cover operating expenses, let alone the initial start-up costs. I'm pretty sure the city's leaders don't view that as a problem, though. If the boats increase Liuzhou's attractiveness as a tourist destination, the leadership will happily absorb the loss.
The City's regular bus service has started a new route which supports the excursion boats. You can park your car or motorbike to take a boat ride one way, and then, for ¥1, take the No. 100 bus back to where you left your vehicle. Starting at Peacock Mountain Park (Que Shan Park 雀山公园), the No. 100 follows the roads along the riverside from the east side of the pot to the west, and then returns the same way. The bus route is itself quite scenic, with the added bonus that the coaches are air conditioned.
I've sometimes been critical of the local government in this blog, but this is one thing I think they're doing right. Liuzhou is an eminently livable city and is becoming more so every year. Also, I'm glad I could end this blog on a positive note.

End the blog? Yes, the company that hosts this site has notified me that, as of June 25, they will no longer publish blogs. For various reasons I've decided not to look for a new host and will instead "hang up my virtual pen". This will be the last post in the "FFG in Liuzhou" series.
Over the next couple of months, I'll be moving the old posts to the Chinese-Stories-English.com website. If you've been using the blog as a substitute for sleeping pills, you'll still be able to do so.
Thanks for sticking with me these last two years. I hope you'll come to Liuzhou to experience the place yourself, or if you're already here, stick around for a while. You'll have a great time!
Jim Mahler, aka Fannyi (FFG)