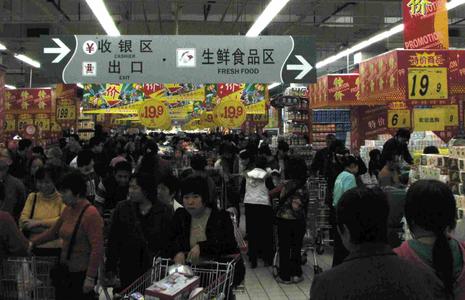 When we got back to Liuzhou in March 2011, one of the first places we went was Da Run Fa, a two-story, Wal-Mart type store. We went on a Wednesday afternoon hoping to avoid the crowds. Unfortunately they were having a sale and the place was mobbed.
The first picture shows the main aisle on the second floor and

the other shows the check-out lanes. There are 52 lanes but only

there were enough customers to warrant opening the others.
We decided not to fight the crowds and didn't buy anything

that day. We went back a few days later and the place felt almost

empty. We could walk down the center aisle without bumping

only 32 check-stands were open (with only 2 or 3 people in each.)
That is, only 2 or 3 customers waiting in each line. There were

also 3 employees at each check-stand: one operating the cash

register, one bagging, and one... well, we're not sure. Supervising,

maybe. Having three employees do one person’s work is very

typical in China. It’s how the government keeps unemployment

figures down. In a hotel a few years ago, we called the front desk

to get a light bulb changed and they sent a 3-man crew. Really!
If you want bags for your purchases here, you have to pay 20

Chinese cents each (about 3 cents US), which has significantly

reduced the litter problem in town.
We were able to find all kinds of exotic foreign foods here, like

that are hard if not impossible to find in most Chinese stores.

You have no idea how good a tuna melt tastes until you've been in China a while.
The store is located near a beautiful park in the north end of town. It's not a convenient location, but the store operates its own fleet of busses which will bring you shopping free of charge. (We would of course never abuse these buses by getting a free ride to the park without shopping.) 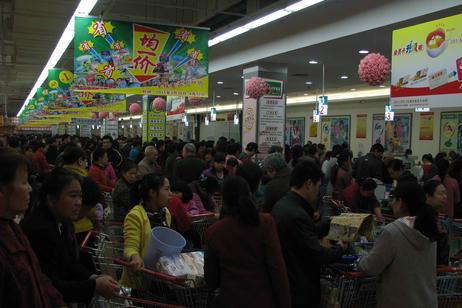