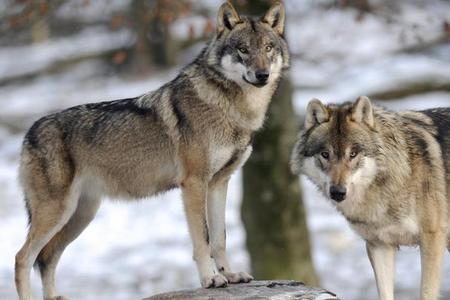 The Wolf Pair
by Deng Yiguang

They were walking slowly through the snow flurries, he and she, a pair of wolves. He was huge and sturdily built, with ears pointed like knives and hard, strong teeth. There was a fiery spirit in his eyes. She, on the other hand, was small and delicate, with a black nose. Her eyes were always dewy, like deep blue pools overhung by a hazy mist brought on by a southern breeze. He was like a mountain, and she was like water.
Just now she’d screwed up, on purpose, and a rabbit with fear in its eyes had run away from right in front of them.
He’d taken her when she was still young. After that they depended on each other for survival and had lived together for a full nine years. Over and over again during those years, she’d pulled him from battlefields that reeked of blood. She’d pulled him to their out-of-the-way den in the hills while he was insensible from his many wounds, and had licked those wounds with her tongue, licked clean all traces of blood. She’d cleaned out the wounds and disposed of shotgun pellets or bits of his vicious enemies’ bones. Afterwards, when wind from the hills seemed to clear things out, she’d hunted down a deer or a badger and smeared greasy saliva on the wound for him. When she’d finished she’d lain down beside him, unmoving, all through the day and night.
But most of the time, he was the one who took care of her.

Their life was a never-ending chase after food, and life-and-

death struggles with their fellows for territory. They had to

guard against attacks by competitors stronger and more

vicious than themselves, and still at all times had to be on

the alert against the malevolence of humans.
Sometimes he was just plain overcome with fatigue, tired

of facing the challenges. But she acted like a malcontent

troublemaker, constantly adding to the problems he faced

aside from natural enemies. She was too curious and had an

[This is an abridged version . The full text, which can be found here, has been ably translated here.]