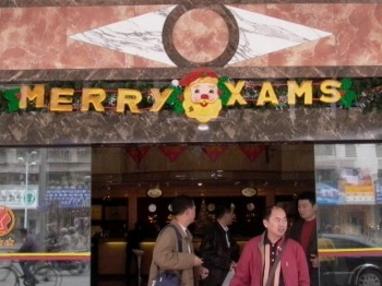 Keeping the X in Xmas

The Chinese don’t celebrate Christmas, of course. Or, I should say, they didn’t traditionally celebrate it. Then a few years ago the Chinese Communist Party realized how much money American retailers make during the holidays and, all of a sudden, Christmas decorations started to appear in the big (government

owned) department stores. Now even some of the smaller

stores are getting into the act.
The decorations are almost exclusively secular – lots of

Santas and snowmen but no angels or shepherds. It seems that

a dose of capitalism is OK, but the Opiate of the People is still a

no-no. I did see a crèche in a store window once, but it was in a

city where Christmas decorations are manufactured for sale to

the West.
The more elaborate displays are set up outside the stores.

Inside, there’re usually just a few skimpy trees crammed in

amongst the merchandise. The goal is to promote sales without

taking up too much shelf space.
We don’t lack for Christmas music here, either. It gets played as Muzak in lieu of the 1960s and ‘70s soft rock that usually serves. Bing Crosby’s White Christmas is a biggie for some reason, even though most of the locals have never seen snow. (That last statement is based on a scientific survey of 9 of 3,700,000 residents of Liuzhou Prefecture, technically known as a “Romney Poll”.) I’ve even heard a couple of hymns. I guess, since they’re in English or

Latin, the censors don’t know what they are.
The city’s street cleaning trucks broadcast music to warn people to get

out of the way, and Jingle Bells used to be part of the year-round repertoire.

smile to my face. Unfortunately Jingle Bells seems to have been dropped

from the playbook this year, at least in the part of town where I live. I’ve

been hoping they’d bring it back for the holidays, but so far no dice.
Tourist hotels join in the festivities, too.

I took the picture on the right in 2004 while I was here teaching English.

thought, How nice of these guys to wish the kids well on their tests. The hotel put up the same sign in 2005, the last time I spent a Christmas in Liuzhou. It’s gone this year, though. Some people just don’t have any respect for traditions.
Merry Christmas!

12/23/2012 Luzhou Laowai wrote: China has been celebrating Christmas for at least 20 years in their own way. Yes, because of commercial opportunities. Not from America. It was from the Europeans that they learned about Christmas. Europe has been selling Christmas since long before America existed.

12/23/2012 Fannyi wrote: I used to live on the west side of town and heard Jingle Bells almost every day. Since I moved to the east side I hear mostly It's a Small World, or sometimes Happy Birthday or another song I don't recognize. By the way, have you heard the version of Jingle Bells being played as Muzak? The "one horse open slee"? (They do manage "sleighing song", though.)