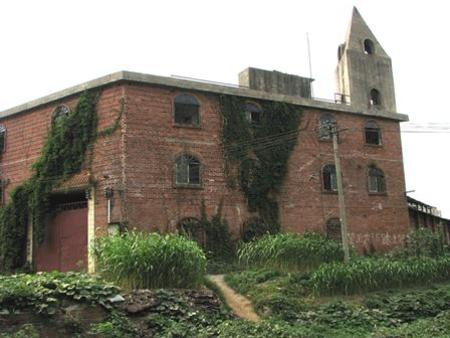 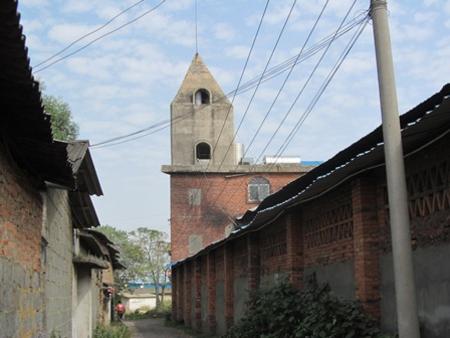 For Sale or Rent

A new road opened up through a relatively rural area on the west side of Liuzhou a while back. In the summer of 2011, I decided to go see what was there. I passed by a place called either "Beefsteak Village" or "Beef Stew Village" (牛扒) depending on which dictionary you look at. I didn't see anything interesting there except a couple of water buffalo. But then, a mile or so further up the road, I came upon this.

A young man living nearby told me it was some kind of factory. He wasn't sure what they made, but he used to see trucks driving in and out all the time before it shut down a few years ago. When I asked if it had ever been a church, he just shrugged his shoulders. He wasn't old enough to remember.
I jumped over a drainage ditch to get a closer look. The ground floor windows were boarded up so I couldn't see inside, the front door was padlocked, and there was a high wall around the back yard. I found nothing to indicate what the building was being used for until I went around to the far side and found a lady shelling peas. She appeared to be old enough to remember when the place was built, so I asked her what it was. She looked me up and down closely for a moment, then smiled and said, "It's a residence!"
"Really? It looks like a church."
"No, no, it's a residence," she said, her smile getting bigger. "You can rent it for only $275 a month."
"Ha," I thought, "the Donald ought to give that lady a tryout on The Apprentice!"
Later I talked to some of the Christians in town. One man said it couldn't possibly have been a Catholic church because there'd only ever been one in Liuzhou, the one by the river. (See here.) Nobody at the "new religion" would even venture a guess.
Last November I went back for another look and found that two signs had been posted on the door. One was dated in July 2012 and indicated that a nearby factory was using the building as a dormitory for employees – so maybe the old lady had been right after all. The other was a notice from the Fire Department that, due to a fire on September 16, 2012, entry to the building was forbidden.
Yesterday I went by again and, to my surprise, the door was wide open, so I walked on in like I knew where I was going. The place did indeed look like a church: some small rooms and a choir loft at the rear, then a large open area three stories high. A crew of six or seven workers was busy up front where the altar would have been, using a large press to make Styrofoam food boxes.
I didn't see any evidence that anyone was living in the place. Nor did I see any evidence of a fire, although one of the workers said he'd heard there was one. I did see something I hadn't noticed from outside: There's no permanent roof, just sheets of corrugated metal held up by poles.
The manager, whose office was up in the loft, said he'd just started renting the place last year. He thought it had been built about ten years ago. When I suggested it looked a lot older, he said maybe it had been refurbished ten years ago, he really didn't know for sure.
I did get the owner's phone number. If he ever answers his phone, I'll update this post.