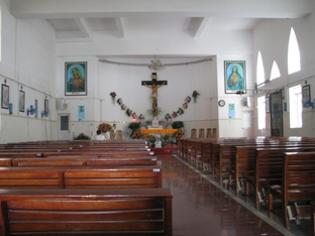 The building pictured here occupies a beautiful plot of land in the high-rent district across the river from downtown Liuzhou. It might look like a church, but actually it's only half a church. That is, part of the building is used as a Catholic church and the other part (the left side in the photos, and perhaps the upper floors as well) is a hotel.
According to the parishioners I spoke

to, the first Catholic Church in Liuzhou

can see a picture here, but I'm not sure

it's authentic.) The building was severely

damaged during World War Two, which

the Chinese call the "Anti-Japanese War",

and could not be refurbished during the

early Communist years. By the 1980s the

official attitude toward religion had softened enough to allow construction of the current building.
One lady told me that construction of the new building was funded by contributions from the parishioners. When it was finished, however, they realized they couldn't afford to maintain the place, so they rented space to the appropriately named Peace Hotel. The lady then said, "Well, there may have been more to it than that, but I don't know about it."
I suspect there's a lot more to it. Old structures are few and far between in Liuzhou, and the official line is that the Japanese destroyed most of them during WWII. In fact, though, there was also at least one fierce battle here between the Communists and Nationalists as they fought for control of the area in the late 1940s. According to one source, the area near the old church was engulfed in flames at that time. (I'm sure the official story is that the fires were started by the Nationalists.) In any event, if there was anything left of the original church after that, the Cultural Revolution would have finished it off in the 1960s. People don't like to talk about those times very much, though.
Also, the City government contributed funds to build Buddhist and Muslim structures in the 1990s (which I'll discuss in future posts). I find it difficult to believe that a building as elegant as the Catholic church could have been funded entirely by parishioner contributions. It seems more likely that the City (and thus the Communist Party) contributed as well, although I've seen no evidence of it.
A poster in the vestibule explains that Catholic doctrine should not be associated with any particular culture because the Gospels are intended for everyone; and further, the ancient Chinese people believed in God (神), although they may have called Him different names. The purpose of the poster, I assume, is to make the locals to feel comfortable about joining a "foreign" religion. The Protestant Chinese Christian Church, which the Catholics refer to as "the new religion," also takes great pains to address this issue. (See here).
I should mention that this is not a Roman Catholic Church but a "Chinese Patriotic Catholic Association" Church. (See here.) Religions can operate openly in China only if they disavow allegiance to any entity outside the country. For Catholics, that means bishops are appointed (or at least approved) by the Chinese Communist Party rather than the Pope. In most other respects, the doctrines of the Patriotic Association are basically the same as the Roman Church.
A sign in the vestibule says in both Chinese and English (but not Latin) that Sunday masses start at 8:30. I went down there at 8:20 a.m. last Sunday to see what the congregation looks like. Silly me, I've spent enough time in China that I should've known 8:30 means 9:30, winter hours.
There were about 40 people in the church at 8:20, singing hymns and reading Scriptures together out loud. People trickled in until, by 9:30, there were well over 100 in attendance – lots of gray hair, both male and female, and a few younger women with children, but very few young or middle aged men. The older folks were dressed simply while many of the young women were decked out in their Sunday best. In short, it looked pretty much like any congregation in the States.
There's a big seafood market behind the church building. I asked one of the vendors if she sold more fish on Fridays. She didn't get it.
Happy (Chinese) New Year! 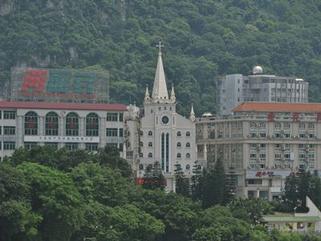