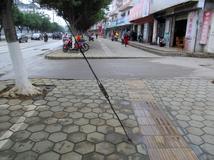 I mentioned last year that I can get an excellent mental and physical workout just by playing dodge-'em cars while crossing the street in Liuzhou. Truth is, though, I don't even have to cross the street – just walking along the sidewalk presents plenty of opportunities for fun and games.

In this contest of wits, the street vendors (of which there is a plethora around town) will plop

(which they almost never are). The vendors' object, of course, is to force people to look at what

they have for sale. I used to think that the pedestrians' object was to see how many vendors

can be bowled over on one pass, but the locals have advised me that that's not considered de

rigueur. Rather, the object is to be as "cool" as possible while you walk out on the street to get

around the vendors, pretending not to notice them.
The Urban Control officers, spoil-sports that they are, do occasionally take time out from their

busy schedule of collecting "license fees" to clear the vendors out of the way. This causes the

game to be postponed until the next morning, when the vendors will be back in place ready for

another couple of months of action.

As Liuzhou Laowai has pointed out, this is one of the locals' favorite

pastimes. Personally, though, I've never seen the point of it. There are so

falling in. The real difficulty, and thus the better game in my view, is

trying to jump over the holes. I guess this is another one of those areas

where we foreigners just can't understand the Chinese way of thinking.

Like the foregoing, the object of this amusing game is to see how close

one can get to the edge without falling in. It's most fun when played at night,

especially if the street is crowded.

This is another bit of nighttime merriment, but it's best played when the street isn't crowded. If

too many people who live in the neighborhood are out for a stroll, you'll see them ducking the wire

in plenty of time for you to avoid it yourself, which takes all the sport out of the game.
Unfortunately, there are almost always a lot of people on the street, so you won't have many

opportunities to play this game. In my experience, the best time is when you still have jet lag from

your flight to China and thus are awake at four a.m. Oh, and make sure you walk at foreigner speed – if you saunter along like the locals, hitting the wire isn't much of a penalty for poor play.
There are several other games in the locals' repertoire, but these four are enough to get you started on the incredibly exciting experience of Streetwalking in Liuzhou.

I really have to apologize for the title of today's post. I got the idea from a fellow who calls himself a "Christian entrepreneur". He believes God wants us to do whatever is necessary to make a buck, as long as we don't get thrown in jail and can spend an hour or two in Church on Sundays asking for forgiveness.
I was also influenced by the headline writers at CNN, Yahoo and other online news services, click-bait experts par excellence.