One of the first things you're likely to notice when you come to Liuzhou is Coiled Dragon Mountain. It sits on the east side of the river, right across from downtown, and is crowned by the Twin Dragon Pagodas. The view might make you feel like you've stepped back in time to the Middle Kingdom of yore, except.... well, except the pagodas were built in 1993.
A pagoda was built on the site during the Qing Dynasty (1644-1

911), according to a sign in the park, but was "later destroyed". This

type of creative ambiguity probably means that your friends and

protectors in the Party have decided that there's some tidbit of

information you'd be better off not knowing. I wonder what that

tidbit could be. Is it possible that the original pagoda (or what was

Cultural Revolution in the 1960's? Laopo remembers that there was

the early '60s, which lends some credence to my speculation.

It's an easy hike up to the pagodas, even for an FFG like me, with

a nice view of the city waiting for you at the top. There are also

some interesting religious shrines along the way (if you don't require antiquity to pique your interest). They range from the simple (a red cloth and incense sticks placed before a tree or rock where a spirit is believed to dwell); to life-size depictions of sacred stories (about which I know nothing); to larger-than-life statues of deities.

​     There's a small temple near the lower of the two pagodas (The right-hand picture). It was supposedly built in the Ming Dynasty (1368-1644), but if that's true, it's remarkably well preserved.
We Westerners tend to divide these sorts of shrines into Buddhist, Daoist or Animist (AKA "Shenist ", i.e., traditional folk religion). That's misleading, however. The Chinese are spiritual pluralists -- the attitude seems to be that no one doctrine has a lock on the Truth (with a capital T), so the only sensible thing to do is respect them all. Beliefs and doctrines that we would consider distinct all get lumped together. That's why I have to laugh at Christian missionaries when they claim to have converted X millions of Chinese to their particular version of the Truth. It's more likely that they've just added a Christian veneer onto traditional beliefs.
Anyway, according to a plaque at the entrance, Coiled Dragon Park was built in the 1990s by contributions, not only from local Buddhists, but also from the city government. Once again, I find myself speculating: Why would the government (and thus the Communist Party) finance religious shrines?
Maybe they thought the town could use another tourist attraction. However, entrance to the park is free; there's no souvenir shop; no organized tours that I've seen; no informative signage telling tourists what they're looking at (except on the pagodas); and the place is not promoted or advertised. If it is a tourist trap, it's very ineptly done.
So maybe someone in the Party felt guilty (or even cursed) by what he or she had done during the Cultural Revolution, and wanted to make amends by rebuilding the shrines. As far out as that idea seems, I can't think of any better explanation for why the Party would fund this place. Historians and journalists should get to work and find out the truth about this matter. For me, though, wild speculation is a lot less work than historical research, and a lot more fun.

Regarding the Preserve Peace Altar that I discussed in a previous post (here): It's still there, and the building behind it is finished. It turned out not to be a Hilton after all, just some kind of storage shed. 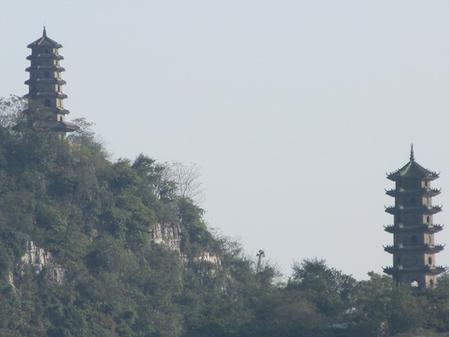