Rule of the Road

Foreigners often remark that the traffic in Liuzhou is too chaotic. Drivers seem to go all over the place without regard for rhyme or reason. In fact, however, the traffic patterns are entirely logical, once you understand that the drivers are following one basic rule: They drive in exactly the same way they walk.
For example, suppose a Liuzhou native is walking along a crowded aisle or sidewalk. He or she suddenly realizes there's something important that needs to be done, such as making a cell phone call or thinking about what to have for lunch. The custom is to stop right where one is and do one's thing, without moving to the side to let other people pass on by. If standing in the middle of the traffic flow inconveniences others, well, that's their problem.
So of course, Liuzhou drivers do the same. At least once or twice every time I go

out for a walk, I see something like this cab driver who stopped in a traffic lane to

load passengers.
Once, on a busy four lane street with two lanes in each direction, I saw a driver

stop in the inside lane. After a moment the passenger door and the two rear doors

opened, and a granny and several kids poured out onto the road while the traffic

whizzed by on both sides. Some of the cars behind this one switched to the right

lane to go around, while others edged to the left and played chicken with the

oncoming traffic. Eventually the granny and kids were able to make it to the far side of the road and the car drove away. The only unusual thing about the scene was that nobody honked their horn!

If you're walking and realize that your destination is on the left side up ahead, you might make a beeline straight for it. Liuzhou drivers often do the same thing. As far as 100 yards from their destination, they will start edging to the left, into the oncoming traffic lanes. By the time they get to their destination, the oncoming traffic is all going by on their right side, so they can make their left turn without having to wait.
I see someone making this kind of left turn at least once a week. When I mentioned it to a traffic cop recently, however, he said he'd never seen it and couldn't believe that any driver would ever do such a crazy thing. I wasn't surprised that he'd never seen it. Liuzhou traffic cops realize their jobs are immensely easier if they keep their eyes closed at all times.
Well, maybe not all the time. Every once in a while the government institutes some sort of "campaign." For a while cops magically appear all over town and actually enforce the law. (We're currently in the middle of an anti-jay-walking campaign.) After a few days the cops disappear and things get back to normal.

a time. (See here.) So do Liuzhou drivers. The guys in the following picture are turning

left across three lanes of oncoming traffic to get into a hospital parking lot. The lot is

gated so it takes a couple of moments for each car to get through. Instead of waiting

in their own lane for an opportunity to turn left, however, the drivers pull into the

oncoming lane as soon as they get the chance, and wait there until they can inch

across the next lane. Oncoming traffic, like the brown van, moves to the other side of

the road to get around them.
This happens at this location (and others) every morning. There's a police kiosk a little ways down the road, but the cops never come out to direct traffic. They're too overworked. They have a lot of tea that needs to be drunk, and newspapers that have to be read, and friends they must chat with. Such important duties don't leave much time for menial tasks like directing traffic.

As cars become more common on Liuzhou streets, cases of road rage do as well. We've translated a couple of newspaper reports of such cases, like the one indexed under the name "Ogre Beats Woman", story #7 here. The most interesting thing about that article is that neither the reporter nor the by-standers he interviewed seem to have considered road rage as a possible cause of the incident. Possibly it's too foreign a concept to occur to them. 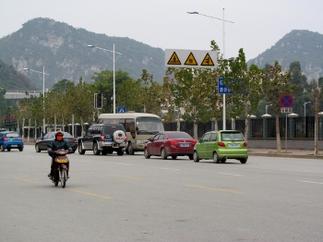 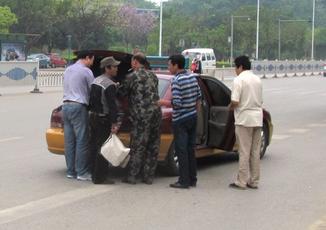