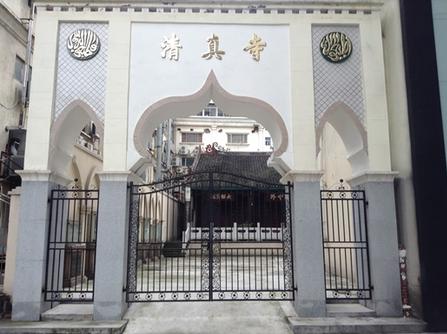 Smack-dab in the middle of downtown Liuzhou, tucked in amid the high-rise buildings a stone's throw from the local McDonald's, the intrepid tourist can find this mosque. I don't have the foggiest how the developers missed the place.
There are 20+ million Moslems in China, maybe 1.5% of the total population. They

mostly live in the far west of the country and belong to ethnic "minority groups." Here

in Liuzhou, according to a sign in the courtyard of the local mosque, there are about

4,400 "adherents" to Islam. Only about 40 usually attend prayers, though, and they

pretty much fill up the place.
The sign also says that Liuzhou's mosque was first built in 1673, at a location not far

from the current site, at the behest of Provincial Governor Ma Wei. ("Ma" is a common

surname among Chinese Moslems.) It burned down during an insurrection in 1857, but

was rebuilt in 1879 and refurbished in 1923. Five sandalwood tablets were hung on the

front of the building, each inscribed with one character, together reading: "Most Holy

Hundred Words of Praise." The tablets were destroyed in 1967 during the Cultural

Revolution. As for the structure itself, the "decrepit" main building was rebuilt in 1999-

time). The Communist Party of course approved this expenditure, and I refuse to

speculate about the motives. (But see here.)
There are also several stone tablets in the courtyard, dated as early as 1695,

commemorating various events in the history of Liuzhou's Moslem community. The

have been copied to the extent possible, and the copies are also on display.
Reading right to left in the first photo, the signs on the front of the building say:

"Never-ending Sincerity", "Teachings Cover the Whole World", and "Almighty and

Profound." Slogans etched on mirrors in the foyer sound a bit more political: "Love Country, Love Religion" and "Unite and Struggle Forward." And a cloth banner in front of a nearby Islamic restaurant reads: "Resolutely Support the Chinese Communist Party." If I were given to speculation, I might think that the local Moslems were worried about retaliation for the recent "unrest" in the Moslem areas of Western China.

To the best of my knowledge, Liuzhou does not have a synagogue or temple. (An internet search for "Liuzhou Jewish" turned up links to dating services for Jews in the U.S.) In fact, there aren't many Jewish people in the whole country.
Some people believe that the first civilization in China was created by one of the Lost Tribes of Israel. Far be it from me to call such ideas silly. (I can think of several more appropriate words). People with less of an ax to grind believe that Jews first came to China between 1,500 and 2,000 years ago. (Click here.) There was a large Jewish community in the city of Kaifeng, and smaller communities elsewhere, but they had all essentially died out by the latter part of the 1800s. They were either assimilated into the Chinese population (according to Jewish historians) or converted to Islam (according to Moslem historians). (Compare this article cited above in Islam in China with this Youtube video.)
About 30 years ago, one of the descendants of a Kaifeng Jewish

family went to school in New York to learn about his heritage. He

converted to Judaism – well, I'm not sure that "converted" is the right

word. Anyway, he returned to Kaifeng to re-establish a Jewish

community there, apparently with some success. You'll see some

UPDATE: The front gate of the local mosque has been refurbished.